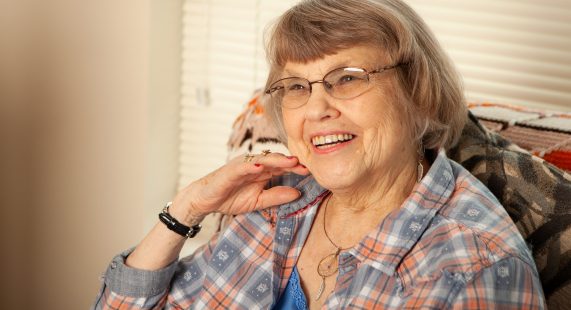 Grace and her husband moved into an assisted living community due to various health conditions. After her husband developed Parkinson’s disease, Grace knew they would need more help. Although her daughters and son were willing, they weren’t always able to help since they lived out of town.

After her husband passed away, Grace took it upon herself to look into Case Management services based on a suggestion from the Director of Wellness at her assisted living community. Just ten days after signing up for services, in June of 2017, Grace fully understood the value of Case Management.

One morning at 2 a.m., Grace began to feel ill. She thought she was having a heart attack. She called 911 and then she called the emergency contact number for Elder Care Services (then transitioning to Freedom Home Care.)

She told the woman on the line that she wasn’t afraid to die, but she didn’t want to die alone. The Case Manager who was on-call that evening, Sharon, met Grace at the door of her assisted living community and then followed the ambulance to the hospital.

Grace spent several hours in the hospital that night. Sharon never left her side. She advocated for Grace, contacted her family to let them know Grace’s condition, and kept her from being alone until her daughter was able to get to the hospital. The next day Grace’s Case Manager Ann visited her in the hospital as well.

That was the beginning of Grace’s on-going relationship with her Case Manager, Ann, and Freedom Home Care.

“It’s the best money I’ve ever spent,” said Grace of her Case Management and Emergency Contact Services. “I’m so comfortable knowing that I can call someone whenever I need anything and my children feel better knowing I have someone local who will respond right away if I need help.”

Grace’s Case Manager also takes her to her doctor’s appointments as a part of her services.

“I’m so glad someone is with me,” said Grace. According to Grace having her Case Manager at her doctor appointments really helps her. Ann is able to relay the information from the appointment to her children and help Grace to remember what was said by the doctor and any follow up instructions or appointments.

“Ann makes me feel so comfortable and at ease,” said Grace. “I know she’ll always be there when I need her.”

Grace now has the peace of mind that with a Case Manager she’ll never have to be alone.